Choose Your Mask in Venice

Choose Your Mask in Venice

Masquerades are synonymous with Venice, the city of illusions and fanciful palazzos that enchant under the moonlight. People have donned masks there for more than eight centuries.

Since early times, humans have sought masks for ritual, for religion, and for power. The Ancient Greeks among others, used them for dramatic performances. Through the ages, Venetians have worn masks for celebrations, theater, but most intriguing of all, for anonymity.

The bauta and the white volto were popular styles of Venetian masks, enabling cloaked wearers to leave their identity behind and look alike. As you wandered the narrow alleyways centuries ago, even your spouse wouldn’t have recognized you passing by, dressed in your mask, cape, and standard hat.  Such masks proved essential for mixing with other social groups, spying, political activities, partying without responsibility, and for amorous encounters.

Other folk, not so inclined, chose to wear half-masks adorned with jewels, feathers, pearls, and veils.

Unleashing the Real You

But the fundamental question for all mask wearers is: what version of yourself are you underneath? Does the mask bring out your altruistic side, or your darker nature?

By the 1300s, the Venetian government restricted the times of year when residents could wear masks, attempting to rein in licentious and criminal behavior—with only partial success. In the waning days of the Republic of Venice, near the end of the 18th Century, masked nuns and monks at gaming tables once again showed the irresistible allure and disinhibiting properties of facial disguises.

The Carnival of Venice started with a military victory in 1162—or so they say. The festival grew through the centuries, and covered many months, not just the pre-Lenten period. In 1797, when the Republic of Venice fell to Napoleon, it was outlawed. Reintroduced in 1979, the celebration now attracts millions of elaborately costumed participants each year.

Exquisite, hand-decorated porcelain, glass, and paper-mache masks gaze out from store windows in Venice. They’re ready to be pressed onto the faces of willing celebrants, liberating them, perhaps, in the process.

Musings of Philosophers, Psychologists and Writers

“Don’t you know that a midnight hour comes when everyone has to take off his mask? Do you think life always lets itself be trifled with? Do you think you can sneak off a little before midnight to escape this?” ― Søren Kierkegaard

Carnival or not, we all wear masks to some extent—psychological ones—whether to function more smoothly in the world, to protect ourselves, or to hide who we really are. In the quote above, Kierkegaard warns that we cannot become too attached to them. We need to reveal our true selves.

There’s another side to his warning though. In the prologue of my book, Venetian Blood, Count Sergio Corrin took off his Pinocchio mask in the garden of the Belvedere Hotel, before midnight. Yet he couldn’t escape the fate that awaited him.

Christine Evelyn Volker became intrigued by foreign cultures at an early age, which propelled her to study Spanish, German and Italian. After pursuing an MLS and an MBA, she was drawn to international banking where her career brought her to Italy. A native New Yorker, she resides with her husband in Northern California. Venetian Blood marks a return to her roots in the humanities. She is currently at work on her second international mystery, this one set in the rainforest of Peru. Learn more... 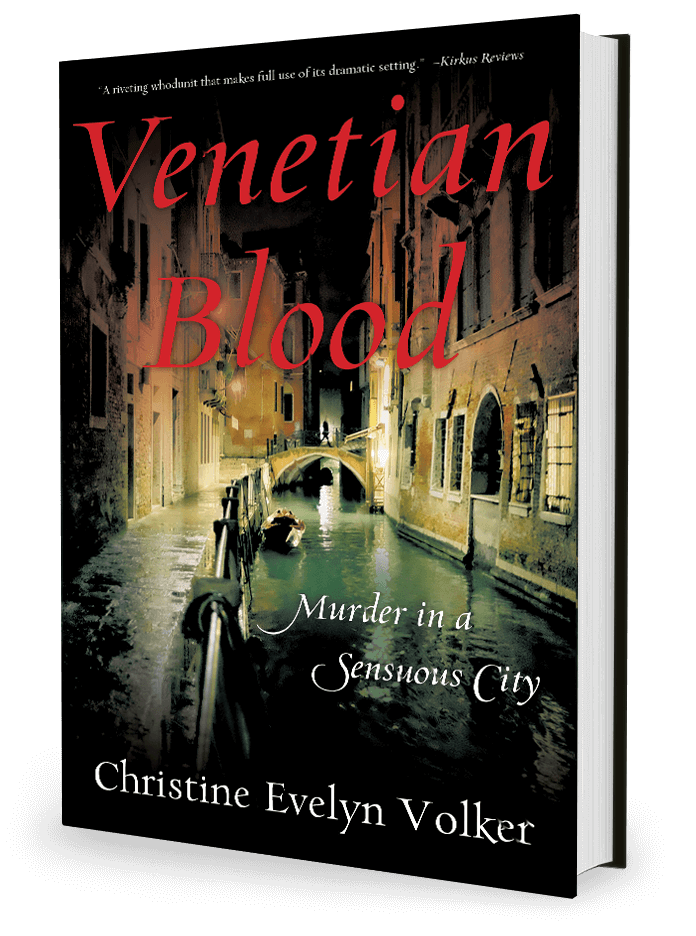 A captivating tapestry of murder, betrayal and family, Venetian Blood is the story of one woman’s brave quest for the truth—before it’s too late. 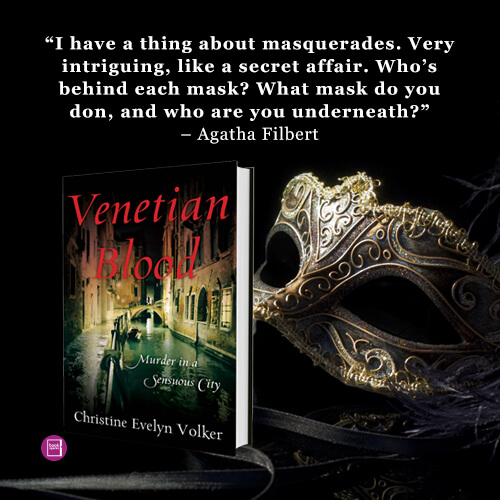